Your Ideas Have Led the Way, Thank You

IN 2020, TGSF PURCHASED A FULL SET OF NEW EASYFIX FENCES, DESIGNED SPECIALLY FOR THE NATIONAL STEEPLECHASE ASSOCIATION. THANK YOU FOR ASSISTING US IN THIS HUGE SAFETY ADVANCEMENT!

Safety is at our core. Because of your generous gifts, foresight and dedication, steeplechase racing is accelerating safety and educational initiatives, and these efforts are having an impact.

With a track record for being one of the most exhilarating sports, an emphasis on the safety of both horses and jockeys is not lost on any of its participants and supporters.

With financial support from you, its donors, the Temple Gwathmey Steeplechase Foundation (TGSF) has been a partner of the Safety Task Force since 2012 when it was established by the National Steeplechase Association (NSA) to evaluate all safety issues.

Funding from the TGSF assisted the Safety Task Force with the production of slow-motion video to aid them with gaining insight into the jumping techniques of steeplechase horses. The footage enabled Dr. Nathaniel White of Virginia Tech’s Marion duPont Scott Equine Medical Center to conduct a thorough analysis.

Safety Task Force members were then better able to evaluate methods that could help horses see contrast between the race fences and the mono-color of the course.

The recommendation of white knee-lines affixed to the top of jump rolls on the National Fences was studied with financial assistance from the TGSF. They were then implemented for the first time at sanctioned race meets in 2015. Conclusive results will take time but nearly all of the trainers and 100% of the jockeys support the safety measure, according to Safety Task Force Chair, Reynolds Cowles DVM.

Other safety initiatives supported by the TGSF include:

Without your donations many of these initiatives would not be possible and the sport that so many have been connected to for generations would not function as it does today. For this, we thank you. 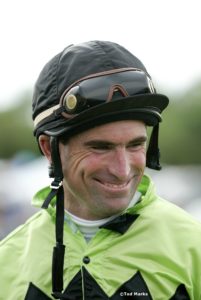